Backtesting is important to understand the performance and behaviour of your strategy, but there are a number of issues which can result in a backtest producing much better results than are likely once the strategy is run live (or dry-run).

This information applies to the Hyperopt feature as well, which processes strategies in the same way as Backtesting.

To start with, make sure to familiarize yourself with the official documentation on Backtesting and it’s assumptions.

Refer to Prices Used For Orders and Market Order Pricing in the Configuration documentation for more details.

Things to watch out for when backtesting:

Something that can be difficult to get used to when backtesting is that signals are generated from the entire time range at one time. The bot does not start at the first candle and process each candle in order.

populate_indicators, populate_buy_trend, and populate_sell_trend are called once for a given pair, and generate all of the signals for the entire duration. This means that the “end” of the Dataframe is always the final candle of the backtesting time range, and is not the “most recent” candle as it would be when running live or dry.

When creating the signals for any given candle it is therefor easy to accidentally read from the candles which follow in the Dataframe, effectively “seeing into the future”. When running dry or live, the future is not available.

Read the official documentation on common mistakes made when developing strategies for details on things to avoid.

“i keep tightening trailing stoploss and backtest profits go up. that cant be right.”

One backtesting anomaly that seems to produce incredible, one might even say unbelieveable, results is the use of very small trailing stops.

Here’s an example strategy that exploits this feature. It uses no signals, and simply buys on every candle on a 1h timeframe. Sells happen by reaching minimum ROI of 1%, or by hitting the trailing stoploss of 0.1%. 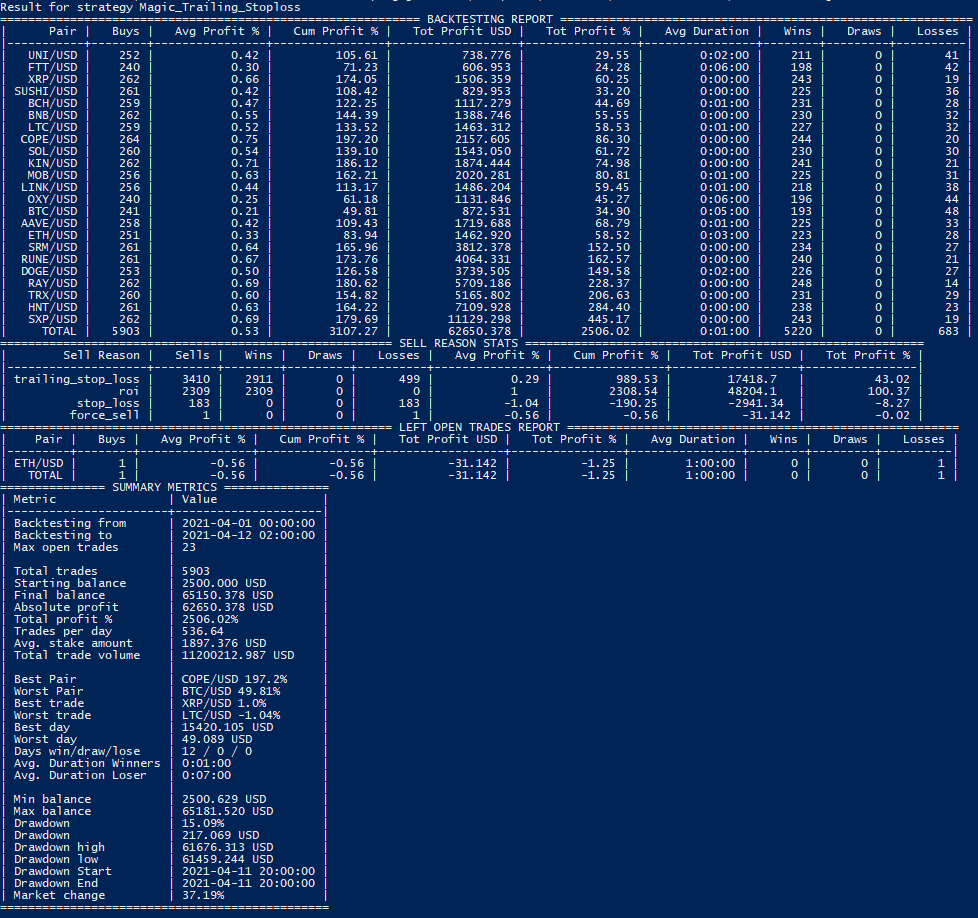 Sadly, this strategy will not produce similar results when run live.

First of all, take a look at the Avg. Duration Winners / Losers. 1 minute, and 7 minutes respectively. When trading hour long candles, this is a sign that you’re exploiting the behaviour of backtesting. 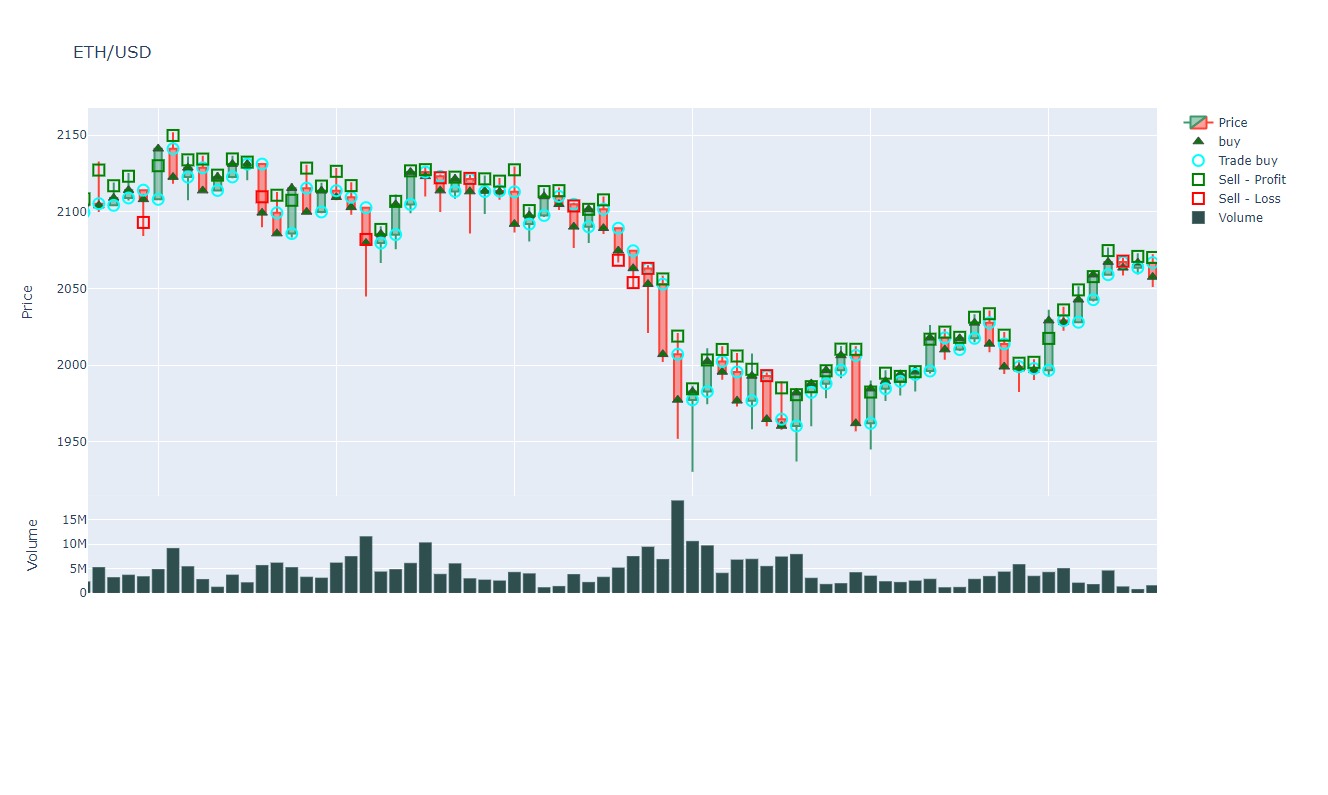 Most of the candles show that the trade opened and close in the same candle, which backtesting will consider to be 0 minutes, or on the very next candle.

When backtesting at any timeframe, Freqtrade has only candle data to work with. It doesn’t know how the price moved during the candle. With 1m or 5m candles, it’s less of a problem (although it still exists), but with longer timeframes, like 1h, 4h, etc… Freqtrade needs to make some major assumptions about the order of events.

Backtesting with extremely tight trailing stops essentially gives you a perfect candle trade, selling just below the high of the candle, almost every time.

The longer the timeframe you use, the less realistic this is. With a small trailing stoploss, it’s exceptionally unlikely that the price would move directly from open to high without decreasing enough to trigger the stoploss. If your stoploss is smaller than the spread on the pair you’re trading, the stoploss will likely be hit on the next sell trade. The longer the timeframe, the more likely your trailing stop, or even your default stoploss, will be triggered before reaching the high and then falling.

If you have a reasonably tight ROI set, you may see the ROI hit instead of the candle high, but the same trailing stop issue applies. The longer the candle, the less likely the price will actually reach the ROI before triggering your trailing stop.

What To Watch Out For

Things to watch out for while you’re developing/backtesting your strategy that might be a clue that you’re accidentally exploiting this behaviour:

One solution you can use to ensure that you are seeing more realistic backtest results is to backtest your 1h strategy at 5m or 1m, using an informative pair at 1h to generate trade signals. The signals will operate on the same 1h timeframe that live does, and running the strategy using 5m or 1m candle data will simulate price movement during that 1h, providing more realistic trailing stoploss and ROI behaviour.

Unfortunately this will be slower than backtesting at 1h, and it complicates the code somewhat. But if you plan on using a trailing stoploss or ROI, you probably want to know that your backtest results are not complete lies.

Here is a simple strategy that uses a simple EMA crossover to generate buy signals:

Backtesting shows a very respectable 11% profit, but this is an illusion: 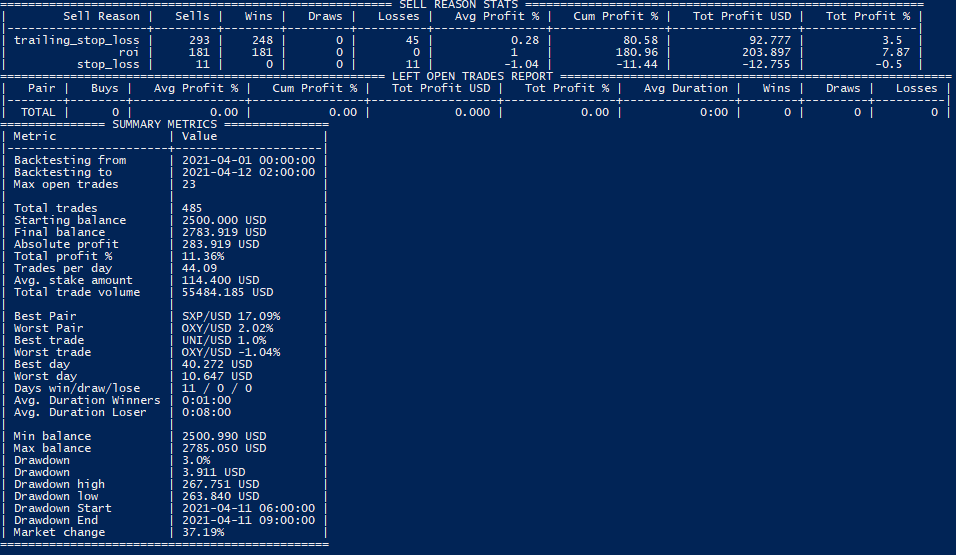 And the same strategy after converting it to be backtested at 5m or 1m:

Backtesting now shows all of the profits have vanished, this is much closer to what would happen live, and will be even lower once spread, slippage, unfilled orders, etc… are accounted for. 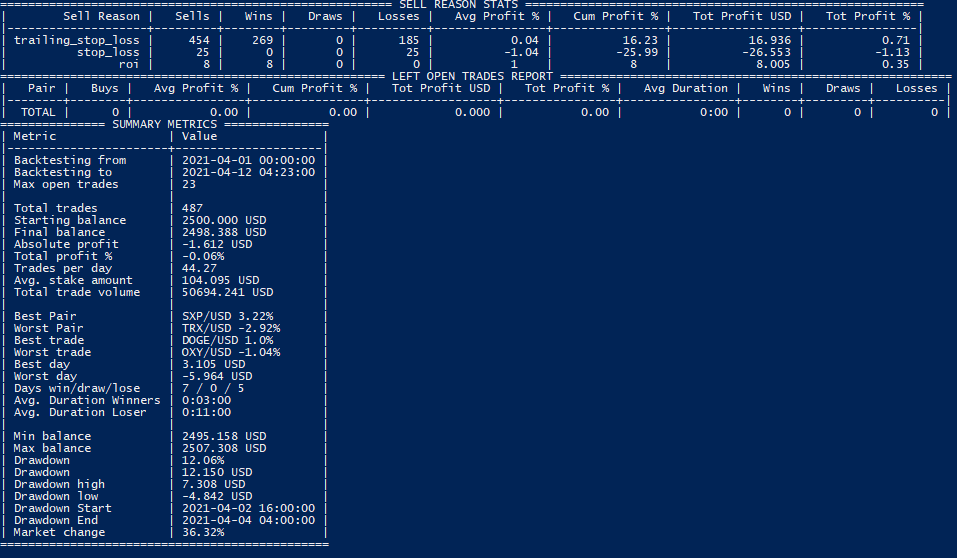